Behind the scenes: What She Saw By Lantern Light

I’ve been a fan of both Enchanted Conversation and World Weaver Press for years.  So when I saw the announcement that Kate Wolford would be heading up a joint anthology of original or lesser-known fairy tales set in winter, I decided I would write towards her prompt.  I never actually expected that she would like it, though I did try to hit both her theme and word count goals as a sort of experiment for myself.

What follows is a spoiler-free behind-the-scenes glimpse into the story, why it turned out the way it did, for those who like to read such things.

When I sat down to write the story in April (2015), my grandmother, for whom I’d been the primary caretaker the first six months or so of her brain cancer, had just recently passed away.  My own health, since I had my own chronic illness to contend with, had been thoroughly shot to pieces, but as part of my recovery I’d decided to return to writing again little by little.

I also had no workable computer at the time and so the idea was that I’d trial out writing a couple short stories on my 7″ tablet paired with a new bluetooth keyboard before delving into anything longer.  This set-up created the interesting effect of only being able to see a few lines of story at a time.

If the tale is packed full of details, it’s because if I didn’t write them, they would not exist.  Whatever ended up “on paper” became the story in my head, not the other way around.

In the bleak midwinter…

The opening line of the Frozen Fairy Tales prompt also happened to be the title of one of my favorite carols.  I’ve included the version that has meant the most to me over the years, trekking with me through the snowfalls and dark nights of my time living in Armenia, and soothing my grandmother’s anxiety as we sat together in her living room in our last month together.  I tried to capture the essence of the song in my story, both consciously and unconsciously.

“And a woman as had her wits about her.”

The Secret of Roan Inish is perhaps my favorite folktale movie of all time.  I watched it religiously when I was younger, to my sister’s bemusement.  If I was going to write a own folktale retelling, I had to pay homage to it in some way, if only in a turn of phrase.  Everyone with Netflix should check it out.

‘Not old like me. I mean old. Old like darkness and stars,’ she said to the flames.

Terry Pratchett’s Thief of Time has been my “bedtime story” audiobook of choice in recent years.  It never fails to sooth my own anxiety and help me conquer my insomnia (a frequent, pesky demon since my chronic illness struck).  One of my favorite scenes is when Nanny Ogg tells Susan, granddaughter of Death, her own hearth-tale about the lady Time giving birth to a mostly-mortal boy.  In honor of Terry Pratchett’s passing and in thanks for all the comfort and relief, I paid tribute to this scene by giving my favorite line a cameo.

The original Alsatian folktale I based my retelling on starts off with a newly-wed young woman setting off on her first, midnight trip from Rosheim to sell goods at the market in Strasbourg.  Making the switch to Strasbourg’s world-famous, centuries-old Christmas Market seemed like a perfect change to make, given the winter theme.

The concept of a child born on Sunday being able to see into and participate in the world of spirits and faeries I borrowed from a different Alsatian folktale, which I translated from an oral telling under the title “The Faerie’s Gift of Tears.”

My own family lore…

I grew up with stories about my ancestors, including how one Swedish ancestor of mine (a young woman) would regularly walk for long hours of the night to “commute” between where she worked and where her family lived.  And there was this one time where she thought she saw something frightening in the dark…. I won’t tell you what it was or what it turned out to be, but the imagery has stayed with me.  My grandmother also told me a couple tales of her family members encountering friendly ghosts.  So, there’s that. 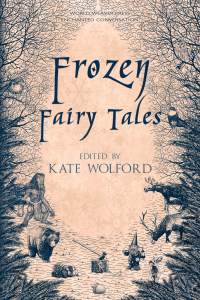 My Alsatian folktale retelling “What She Saw By Lantern Light” will be published in Enchanted Conversation‘s and World Weaver Press‘ joint winter anthology, Frozen Fairy Tales.  You can find out more information, including the announced table of contents, here. You can find Frozen Fairy Tales on Goodreads, here.

Until then, I put my Bibliography back up, fully fleshed-out.  I took it down a couple years ago because it was depressingly empty and I felt having it up was rather pointless (and discouraging).  But now it is much fuller! And there is a point to having one! Woot woot.

Well, I started and finished a short story this month!  And I got it mostly on wordcount target! I am so proud of myself, not gonna lie.   World Weaver Press is doing a fae anthology with a deadline of November 30th for submissions, which is perfect since I’m going to start Queen 3.0 in December and I’ve been craving writing/playing with the fae for some time now.

So I decided to both clear my palate from Queen of the Eight Banners and scratch the eldritch itch at the same time.  I know I swore off short story writing last year, but I found some great advice that was just what I needed to help me get over my particular struggles with the format, and when I swore off short stories it was mostly to keep myself focused on finishing Queen.  So, I’m having a blast with this thing, not taking myself too seriously with it.

I still don’t know what exactly to call it.  For now it’s “The Ring & The Gate” but I’m also toying with “Most Desired.”  It takes place on the plateau des fées (the fairies’ plateau) at the Elsberg gate along the Pagan Wall outside Strasbourg, France near Mont St. Odile in the year 1855.   Yes, that’s a real place!  And yes, that’s highly specific, isn’t it?   It’s a pre-existing character’s backstory, which helps me whip this out pretty quickly.

Here’s a peek at the process.  I set up a Pinterest board so I could have handy access to photos and descriptions. (Yes, beware, some of the sites are in French. :p)  You can also check out my wordcount spread:

I cut out the column on the right that contains spoilers on what scenes I was working on. 😉

So, basically, I worked Monday through Saturday for 2 weeks minus one day in the middle of last week when I felt absolutely terrible, sometimes sitting down to write multiple times throughout the day.